Have you ever been so overwhelmed with a current situation because you had so much to do, and just couldn’t even start? Umm, yea that happens to me more often than I would like to admit. Which is actually a big reason I wanted to start getting rid of extra things. I wanted to get rid of that overwhelming feeling all.the.time.

I am not expecting for all my stress to magically disappear as I declutter. I have 3 young children (ages 4, 2, and 11 months), There will always be some sort of stress and overwhelm! But it doesn’t have to be everywhere all the time.

Since I have an entrepreneurial mind that has been allowed to blossom over the past 3 years, that just adds to the pressure because my brain is constantly moving. I am always thinking about something I need to do for either my nutrition business, my husband’s business, our social media accounts, or thinking of a new idea that needs to be focused in on. And all of that brain activity is happening between making meals, picking up toys, cleaning sticky hands, doing laundry (but never putting it away), wiping butts, and looking for the dang pacifier – again.

To be honest, between having baby #3 this past year and launching 2 online businesses, our house has been LAST on my to do list. There is clutter everywhere! It drives me nuts but I’ve had to be ok with it because I just don’t have the extra time and energy to clean it up. That is when I decided not having to clean it up is the best option! If there is no clutter than it can’t be everywhere right??

This is when I embraced the quote that Joshua Becker said this week in my book:  “Start easy, start small, just start somewhere!” 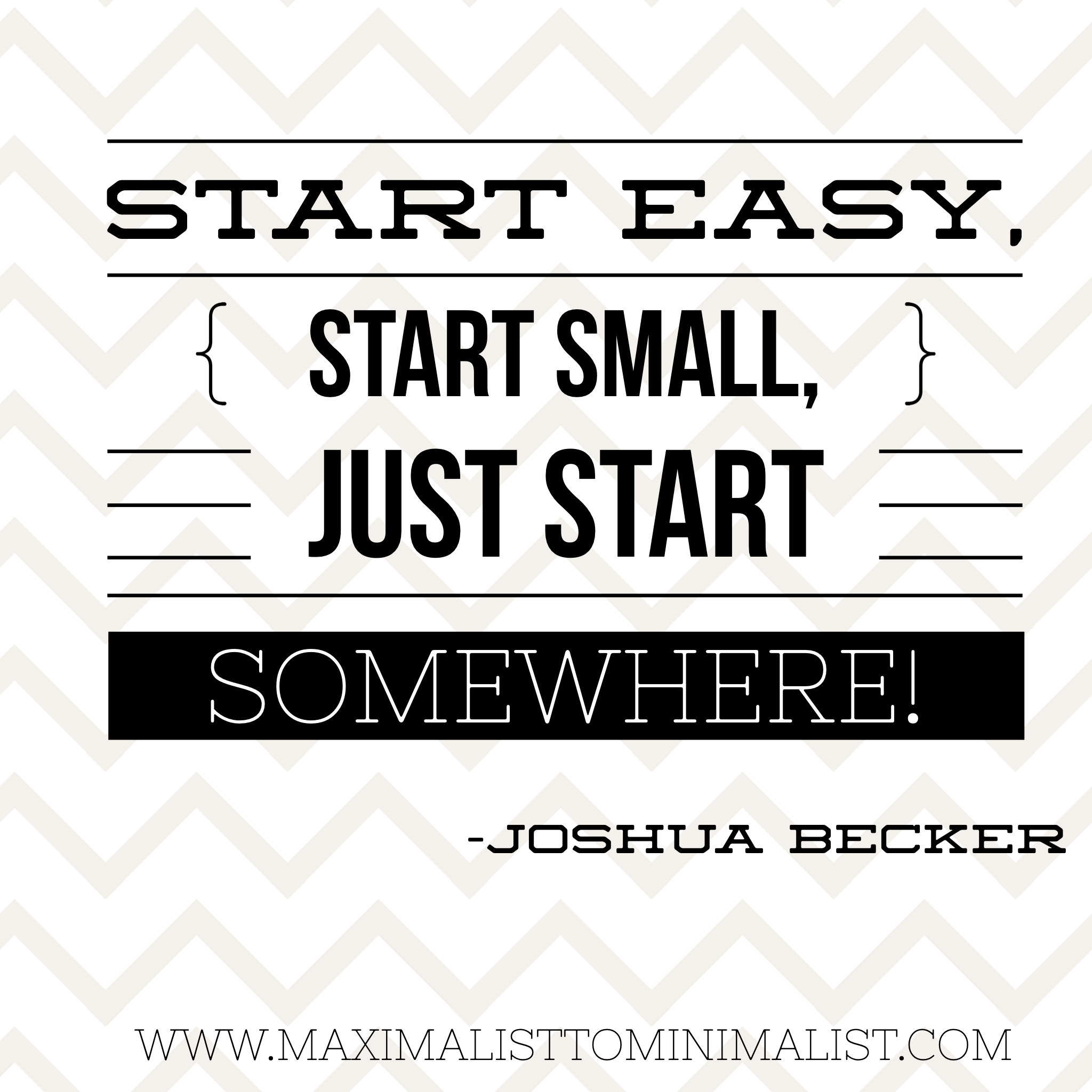 So this week I have really just STARTED.  Started on small projects I can handle at a time. I am not tackling a whole room, but more of one bin in a room, or one type of item.  Those small wins add up and start making you feel good! Like, you can do this! And you can! and I can! We all can!!! rah rah rah! 😉

I wanted to share with you my small wins of the week:

I felt like this was a nice win this week! When we moved into our current house, the lady we bought it from left us her furniture. (We knew her beforehand and we were friends with her). She left behind this Curio Cabinet, which was only a few years old. I thought it looked nice, and I also thought well now I have to fill it! She left behind some pieces to put in it, but I ended up finding my mother in law’s china to fill in the gaps. And there they have all sat for the past FIVE years.  And things have been added in the last few years like a plate set from my grandmother. When I pulled all the dishes out, I was just thinking why? Why are these things taking up space in our house? We haven’t used them!!  My mother in law’s dishes got boxed up to give to her now that the house they are building is almost finished My grandma’s dishes are going to replace our every day dishes because I would rather use something that has meaning to me than just random dishes. The rest of the dishes got boxed up and labeled for our next yard sale. 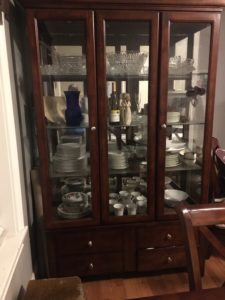 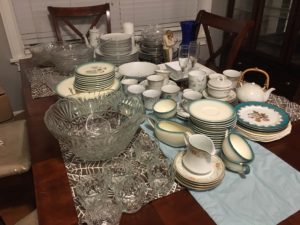 Swapping out my grandmas dishes for our current dishes was a little bit tough on my husband. They were the first set of dishes he had on his own after leaving his parents and I know he didn’t really want to sell them. It’s funny how we can get so attached to things when they really don’t hold a ton of value to us. (They served their purpose but they didn’t really have any other sentimental value.)

I posted the hutch on Facebook and Offer Up so now I am just waiting to get that sold and clear up some room!

It is undecided if I can call this a win just yet. In The More of Less book, Joshua Becker talked about having 2 towels per person in your family. I asked my friends on Facebook how many they have and most said they needed more than 2 towels per person. One even said she needed one for her hair, one for her face and once for her body so that was not happening there. lol. And she has 6 kids! That is a lot of towels!

I wasn’t sure if the towel count included beach towels. We currently have 24 towels with both combined. I dropped the 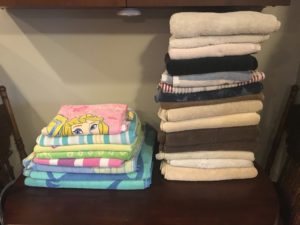 number to 10 regular towels a 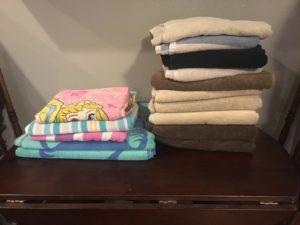 I was also curios if little people counted as a whole person. Well, in reality they should probably count as 3 people because they are messy!! ha.

Another question that arose was guest towels. Are those included? I would venture to say no if you have guests often. We honestly don’t get a lot of visitors often. Usually just my mom once maybe twice per year. Do I keep 2 extra towels for her throughout the year? Or just do more laundry when she is here. I opted for more laundry since she does it when she visits anyway. 🙂

This one was a tad tough for me. And it really happened so fast. I was working on my dishes project and I needed a box to put dishes in to label for the yard sale. I went into my girls’ closet and found a box that would work great but it was full of Tulle. You know the stuff from weddings done in the 90’s. It’s also the stuff used for tutu’s. Which is what I used it for. When my first daughter was born I started making and selling tutu’s and bows to sell on Etsy. I didn’t sell very many. I don’t think I was very good at it. I decided to post it on a Facebook selling group for $10. I had several people interested in it and someone ready to pick it up that afternoon.

Then I went ahead and broke out the ribbon box. 67 spools of ribbon!! 35 of them were brand new never opened! I had a little harder time posting the ribbon because I was thinking, I have girls, you never know when you will need ribbon! Which in one sense is true, but was it worth storing for the instance we might need some ribbon? I didn’t think so. I posted a picture of that too and the lady who wanted the tulle also wanted the ribbon. SOLD.

She told me she had 2 young nieces and she wanted to learn how to make tutu’s. Then I got to thinking, well I do have 2 pink tutus sitting in the closet from Valentines Day last year that I could throw in the mix. I had the girls pictures taken by my good friend Carla, and they were absolutely adorable in their tutus! Just see for yourself! 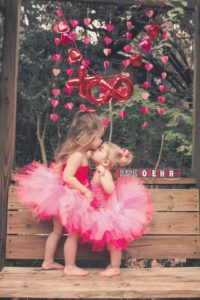 Okay, I know they are my kids so of course I am going to be extra excited about them, but seriously. They are adorable.

But did I need to keep the tutus just because I made them and the girls wore them at one point? Were they realistically ever going to wear them again? No. They *might* put them on for dress up sometime, but they are starting to get too small and will I really get a better picture than my friend Carla did last year? Nope. I have the picture. I have the memories. Now time to let some other mom and daughters have some cute pictures with some overly fluffy tutus.  sigh

I thought I only had 3 wins this week, but there was really a 4th that happened that I was so excited about! This week I went to the grocery store instead of sending Robbie, which means I bought more fruits and veggies. I have been wanting to make more of an effort in getting the kids to eat better so I put a whole bunch of fruits and veggies at eye level in the fridge. Right where they can grab them on their own. Definitely a WIN! It only took about 20 minutes to rinse and cut the fruits and veggies too. SO WORTH IT!  I am planning to get a little more creative with more plant based recipes over the next few weeks, but this is an awesome start! 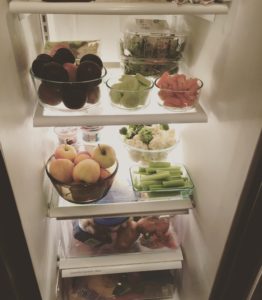 I Want to Hear From You!

What is a small win you had this week? Or even this month? Comment below! 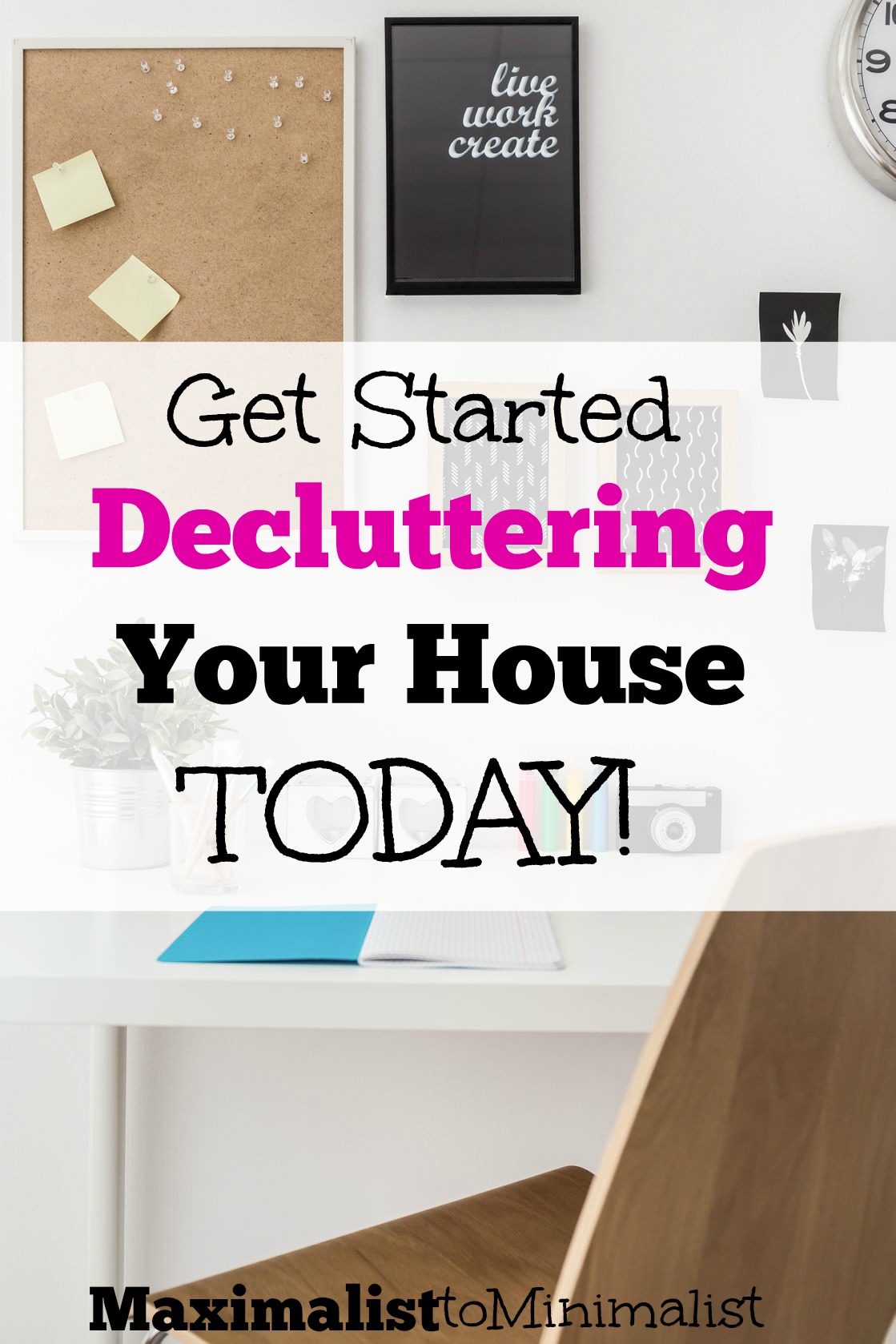 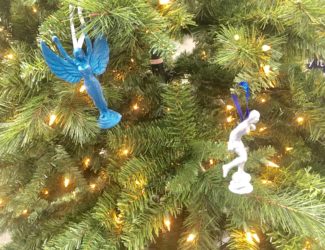 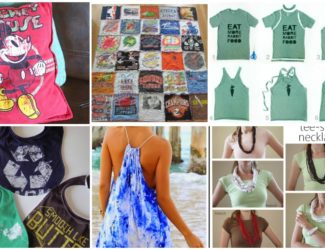 10 Things to Do With Old T-Shirts 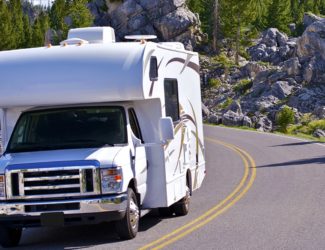 Why Organizing Could Be The WORST Solution For Your Home

We Bought a Camper! And Dave Ramsey Would Approve 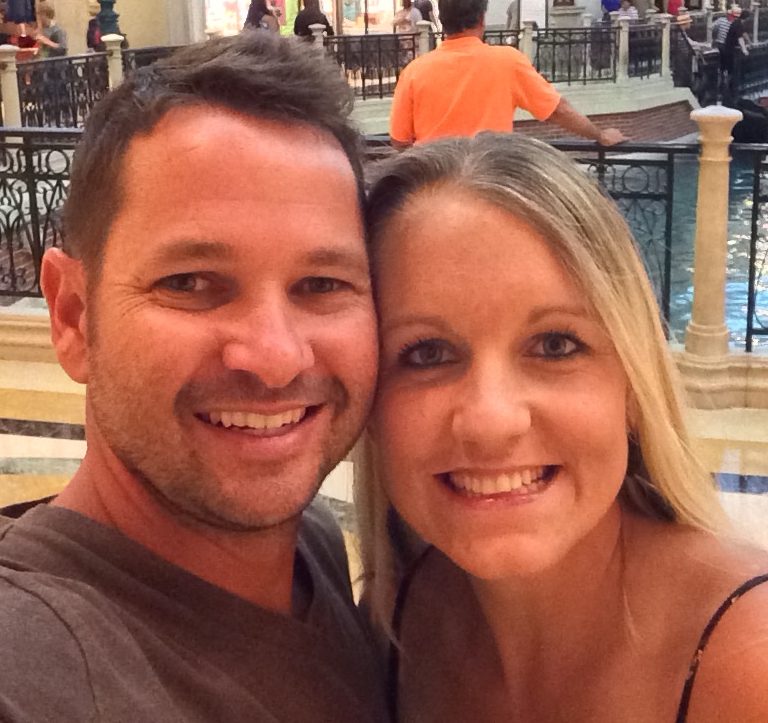 We are a couple with a crazy idea to sell most everything we own and travel for a year in a 5th wheel... with our 3 kids that are ages 4 and under. We are probably a little bit crazy, but we are excited to start fresh with less stuff! And travel the United States while we do it. 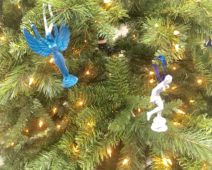 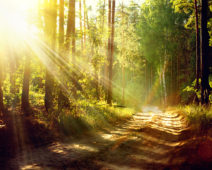 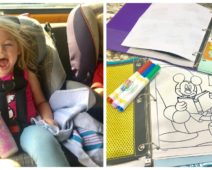 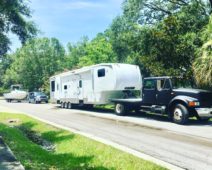 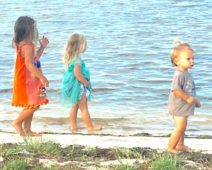 11 Ways To Earn Money While Traveling 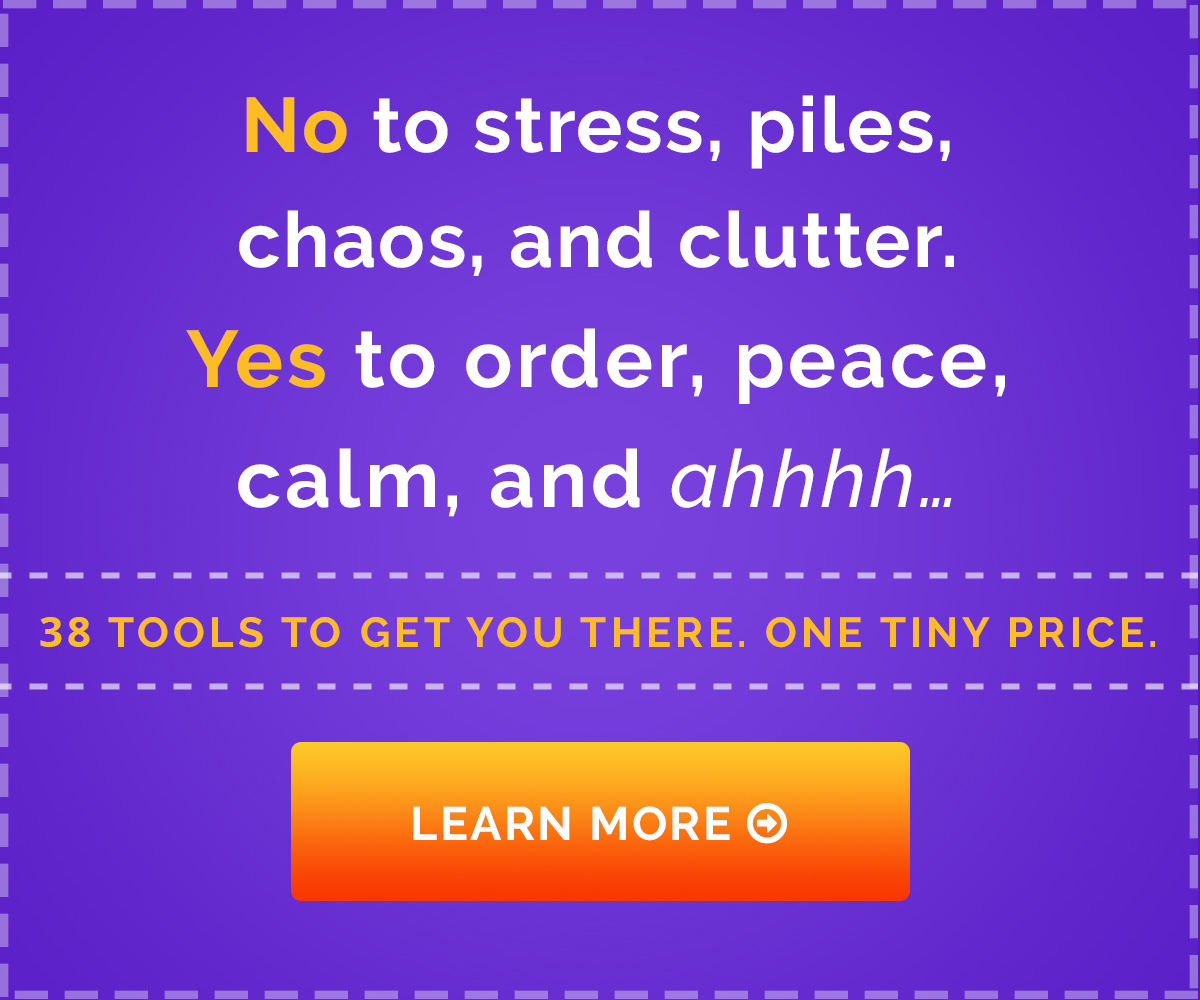